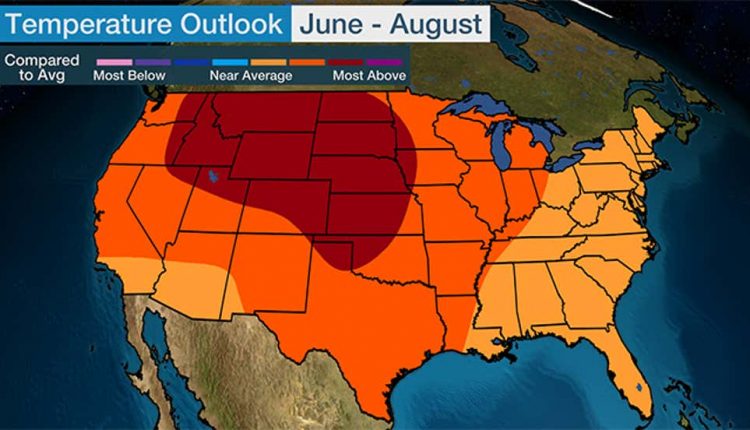 Be Ready for Heatwaves in 2021

Meteorologists from The Weather Channel forecast that the coming months of June to August will be hotter than usual in most parts of the U.S. Based on the Drought Monitor analysis, 46 percent of the connected land area of the country was in drought since the early part of March 2021. Most of the Southwest was in extreme to exceptional drought while most of the West was in moderate drought. The U.S. National Oceanic and Atmospheric Administration’s (NOAA) Climate Prediction Center expects the current drought to persist, spread, and worsen with below-average rainfall through May in the Southwest and Plains.

Utah, Wyoming, Colorado, and New Mexico, comprising the four Upper Basin states for the Colorado River, have a snowpack that is only 67 percent of the average. This means the runoff from melting snow will also be less than usual for Lake Powell, the country’s second-largest reservoir that provides water to 40 million people. Since October 2020, Lake Powell has received only 44 percent of the normal inflow. The U.S. Bureau of Reclamation already wrote the four states to be ready to implement the Upper Basin Drought Contingency Plan when necessary.

This comes after the summer months of 2020 that were the fourth hottest since 1895. Temperatures will continue to rise based on a trend of summer temperatures increasing by two percent from 1970 to 2018.

Last year in Arizona, for instance, Phoenix had 145 days with temperatures of 100 degrees or more and 53 days with temperatures of 110 degrees or more, both record-breaking. At least 494 people died because of the heat throughout the state, breaking the previous year’s record. The figure does not include those who suffered from health problems because of the heat. From 2015 to 2020, there have been over 1,500 deaths because of heat in Arizona.

Power failure during a heatwave is a dangerous combination according to a study published recently at PubMed of the National Institutes of Health (NIH). The public becomes exposed to extreme heat both outdoors and indoors as people are unable to use their air conditioning systems.

The possibility of this combination occurring frequently is rising. The number of major electrical grid failure events in the country lasting for at least an hour and affecting 50,000 or more users rose by more than 60 percent in the last five years.

The study simulated the effect of a power failure concurrent with a heatwave among 2.8 million people in Atlanta, Georgia; Phoenix, Arizona; and Detroit, Michigan. Results show that such a combination based on the recent intensity of heatwaves and duration of power failures subject from 68 to 100 percent of the city populations to high risks of heat exhaustion and heatstroke.

Given the frequency of heatwaves and power failures, households should invest in a power generator for the occupants’ protection and well-being. This is especially important for households with infants, young children, seniors, and family members with chronic health conditions or who are overweight.

Comply with all safety precautions regarding the generator, such as placing it outside the home. It must also be far from windows and doors to prevent fumes from entering the home. It would be safer to have a solar-powered generator but if what you acquire is fuel-powered, you will gain more flexibility with a multi-fuel hybrid model. Keep enough of the appropriate fuel in stock to last more than just a day.

Make sure that you are up to date in your air conditioner repair and maintenance so that it does not break down at the wrong moment. Do not think twice about replacing it when necessary because it can be your family’s lifesaver.

You can boost your air conditioner’s cooling effect and lower your energy bill by replacing your windows with ones that have coated glass that filter harmful UV rays and keep out heat. Pair these with treated curtains or blinds that also repel heat. Choose light colors because these also reflect light and reduce heat absorption.

According to Mayo Clinic, the symptoms of heatstroke are fainting; changes in behavior or mental state such as slurred speech, confusion, or agitation; rapid pulse; rapid breathing; high fever; headache; nausea and vomiting; hot and dry skin or heavy sweating; and flushed skin. If you observe these, immediately call for emergency services.

While waiting for professional help, move the person to a cool place, remove excess clothing, and spray or sponge him with cool water. You may also place ice packs on the neck, armpits, and groin. If the person is conscious, give a drink of plain water that is not very cold as this may cause cramps. Do not give beverages with sugar, caffeine, or alcohol.

Extreme weather conditions such as heatwaves are the result of climate change. To prevent further worsening of the climate, we must not contribute to the planet’s deterioration but instead join efforts to protect it.

Take steps in your daily life to promote environmentally safe and sustainable practices. Do not contribute to the earth’s pollution by avoiding single-use plastics and products that are not recyclable. Remember to refuse wastefulness, reduce harmful waste, reuse materials, repurpose what you cannot reuse, and recycle.

The Overall Story of Dogecoin

Essential Options to move without worry